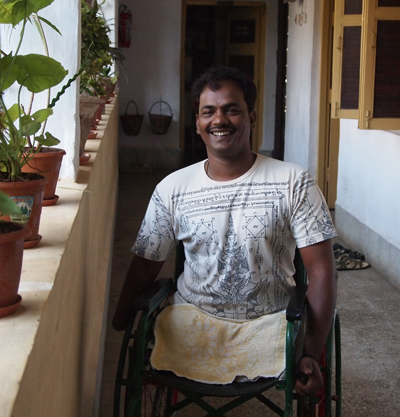 “All my life I was a slave to my addiction. I lost relationships, friends, ruined my marriage, my passion and my career.”

Captain of the Trombay Sports Club Cricket team and winner of the inter club cricket league at 16, for a person without any formal training, Selvaraj showed excellent talent and leadership on the field, especially for a man who lost his father due to alcoholism at a young age, and whose mother worked day and night to make ends meet for him and his sisters.

The Addiction, the Abstinence

A strong willed, determined young man, Selva had no reason to succumb to peer pressure. He tried brown sugar for the first time with his friends at a local bar. What started as a little adventure, a graduation from cigarettes, turned out to be the biggest game changer in his life and promising cricketing career.

One year hence, Selva was completely addicted to brown sugar. Having sensed something unusual in her son’s behavior, Selva’s mother, Rajeshwari, took him to see a doctor, much to his resistance. Instead of prescribing him to a rehabilitation/detoxification program, the doctor told him that the only way of going back to normalcy was to quit brown sugar.

But abstinence does not suit everyone as a treatment option.  And as it turned out, in Selva’s case going ‘cold turkey’ did no good. In days his health deteriorated, physically & mentally. Frightened that his condition would worsen, Selva secretly bought brown sugar. Shockingly, Rajeshwari took no objection when she found out. Having seen her son in a helpless and desperate, unfit state, she gave Selva the money required to purchase the drug.

Selva’s uncle got him a job on the sets of a Bollywood movie as a camera technician. Initially, uncertain about his new job, Selva gave this new innings his best. To everyone’s surprise, in little time he won the reputation of being one of the top technicians in the industry and personally received plenty of movie offers.

However, nothing lasts forever and unable to give up his addiction, Selva found it increasingly difficult to manage his busy schedule with his addiction. During the same time, Rajeshwari also got Selva married. In her attempt to restore her son’s life back to normalcy, Rajeshwari felt marriage would help him get back to a life free of drugs.  The mistake she made, however, was not to disclose his problem while arranging the marriage.

But as time passed, Selva found it increasingly impossible to keep up with his work commitments and personal life. His condition was deteriorating. Lacking the determination, his enrollment in various detoxification programs was also unsuccessful. Eventually, he lost his job and his wife left him, too.

Disappointed with his life and with himself, Selva boarded the Churchgate local from Mumbai Central. En route, he plunged out of the running train. However, other than a few bruises, Selva was left unharmed. But having set his mind, there was no way he was accepting defeat. In his world, his defeat to addiction had left him shattered. Lost for hope, he attempted suicide a second time over. But what happened was unthinkable…

This time, to leave nothing to chance, Selva jumped in front of an approaching train. He lost both his legs and his right hand but he lived. The man, who once boasted of a successful cricket innings and a promising career on the sets of Bollywood, was left crippled.

The Redemption and Mission

Selva, in a wheelchair, rolls towards a group of addicts. Selva, now clean for 8 months, counsels them to adopt a drug-free life. Thanks to Sankalp’s Harm Reduction program and other services for drug-users, he is now able to assist other users in their struggle to quit drugs.

‘Banane wale ne bhikyacheezbanayi he’ (what a thing the creator has created), Selva says, referring to the architect of brown sugar. ‘It reduces a person to such helplessness – he steals, begs, lives on the streets. It not only destroys him but his entire family.’

‘I am the captain of my ship; I am the master of my soul.’ Selva’s mission is to spread awareness amongst the youth about the dangers of substance abuse. He wants to reach out to as many people as possible around the world, especially to those most vulnerable and marginalized, the street drug users.

As narrated by Selvaraj, with inputs from Urvi Gupta – volunteer at Sankalp.