Farman’s Story: Chasing a Dream, Getting into a Fix 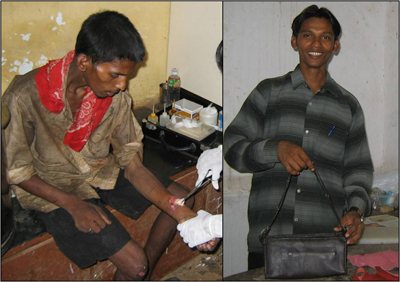 “You are like a son to me. Can I see you off drugs, even if it’s just for a few days?” A few kind words of concern from our counselor at the “Drop-in Centre” at Mumbai Central worked its magic on Farman, and hardcore drug addict for the past seven years.

When Farman arrived in Mumbai from his hometown of Sangrampur in Bihar state he was just eight years old and, like several other runaway kids, was attracted by the bright lights of the big city. He vaguely remembers his early years spent on railway platforms, begging in trains and eating at the few charity outlets in the city. A few years later he started working at odd jobs for catering contractors at marriages and parties.

18th July, 1998 was a turning point in the life of young Farman. This was the day he got his first salary and also his introduction to drugs, namely brown sugar, a crude form of heroin. Beginning with one or two pudis (packets) per day, his intake shot up to ten per day. Each pudi was made into a concoction, simmered in an aluminum foil container and the fumes inhaled. Each day he existed in a drug-induced daze. Eventually he lost his job and resorted to pick-pocketing and other petty crime to support his addiction. This led to frequent arrests and months in prison with its routine police beatings. When too weak to indulge in crime, Farman roamed the streets scavenging for paper, rags, and plastic scrap, selling these to scrap dealers.

Five years ago he started injecting heroin. During this time Farman came to Sankalp’s Drop-in Centre. Initially it was to get treatment for the various ailments he suffered. Later, for a fresh supply of needles and syringes under the NSEP (Needle and Syringe Exchange Program).

About three years ago, Farman’s parents came to Mumbai looking for their long lost son. His mother broke down when she saw him for the first time after so many years. They persuaded him to return home with them, even taking along a supply of “pudis” to keep Farman happy! Back home Farman could not change his ways. He was given a room to himself where he lived with his pudis, shut off from his parents and the world outside. He was a total stranger in his own home!

As the supply of pudis ran out, so did Farman, back to the streets of Mumbai. But this time Farman could not take it anymore. Fifteen years was a long journey for this boy from Bihar and it was one year since he had left his home. His body was ravaged by disease, malnutrition and the constant police beatings. Farman was now desperate and was looking for an escape from the hell he had created for himself. Sankalp was the beacon he finally turned to for help. Perhaps it was his desperation, perhaps it was the encouragement and motivation from the staff at Sankalp or a combination of both that made Farman quit his habit.

He was initiated into our detoxification programme and later shifted to our shelter for addicts facing a crisis in healthcare. Farman had festering, maggot-ridden wounds on both hands. Malnutrition and dehydration made him look almost unhuman. He weighed under 40 kilos. He was gradually nursed back to health. As his health improved, Farman was assigned some ward duties and he was paid a small stipend for his work. Later, he was sent to Goa for job training under our Sustainable Livelihood Programme. Presently, Farman is a member of our staff. He has become a skilled craftsman and makes “designer” leather bags and purses.

Farman has been off drugs for the past two years. He has gained more than fifteen kilos and is well-groomed. He loves his job and his new life. Above all, he loves being drug free and says he has kicked the habit for good. His zest for life and the sparkle in his eyes says it all.

Written by Dr. Aslam Malik, This story appeared in our spring 2007 newsletter.