Altaf: A Life Cut in Half 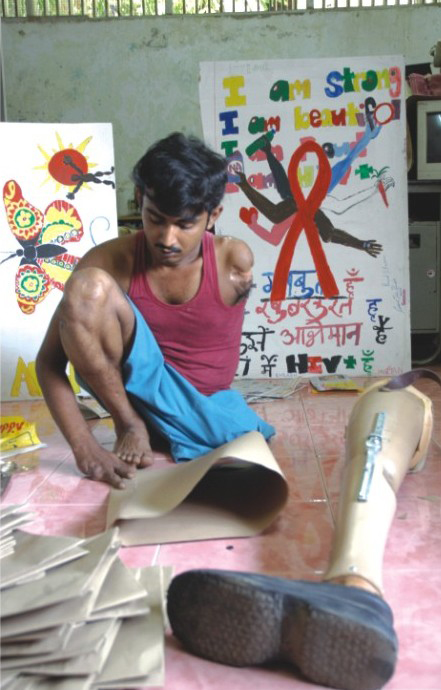 Altaf was busy when I first met him nearly four years ago.  This was at the Shelter, a facility run by Sankalp Rehabilitation Trust for drug users in need of medical and other support.  He was making paper bags and seemed to be doing a rather good job considering that his left arm and leg were missing and the right hand had only three fingers.

In 1993, still in his early teens, Altaf left his village near Bangalore where he lived in acute poverty with his parents, a younger brother, and a younger sister.

Boarding a train leaving for Mumbai, Altaf reached the city the next day and started living on the platforms in and around Mumbai Centrail railway station.  Living the life of a street urchin, he acquired the drug habit.  With a group of friends, he used to hang out by the side of rail tracks, “chasing” brown sugar (a crude form of heroin).  “Chasers” inhale fumes of the drug from a heated foil.  For a living he used to steal scrap from the rail yards surrounding the station complex, and to supplement his income he picked the pockets of rail passengers.  As time passed, he began injecting the drug whenever he did not have enough money.  Living in this way, Altaf met with an accident and lost two fingers of his right hand.

One day, he and a friend decided to visit Ajmer, a Muslim pilgrimage centre a few hundred kilometers from Mumbai.  At Udaipur station where the train had halted en route, Altaf’s friend alighted onto the station to buy food while Altaf waiting at the compartment door.  Both friends had been smoking brown sugar throughout their journey from Mumbai.  Altaf noticed a piece of foil ‘panni’ on the rail track.  He tried to climb down to pick it up but slipped, fell eavily on the tracks, and passed out.  He was run over by a passing train.  He later found himself in a hospital in Udaipur; his injuries were severe, the left arm and leg badly mangled.  He was also in acute withdrawal due to stoppage of his heroin intake.  Thus, half-crazed with pain and in a daze, he limped out of the hospital against medical advice and boarded a train to Mumbai.  Continually losing blood from his wounds, he lay in agony for four days on a foot bridge at Mumbai Central station, refusing to go to a hospital.  Eventually, the staff from Sankalp found him and admitted him to nearby Nair hospital, under instructions from their director.

After spending nearly one and a half months in the hospital, Altaf was discharged and taken to the centre run by Sankalp.  His left lower and upper limbs had been amputated.  His recovery was slow but uneventful.  He was taught various job skills and became adept at making paper bags and other decorative paper products.  His boarding and lodging were provided for and he was paid a small stipend for his work.  Although his physical wounds had healed, there was a lot of pent up anger and frustration which manifested from time to time in bouts of angry outburst and other irrational behaviour.  This led to conflicts with other clients and the staff, leading to his walking out from the shelter.  However he was later given space at another centre, where he is put up at present.  All those four years he has spent with Sankalp, Altaf has not once relapsed into addiction, a huge achievement in itself considering the success rate is so low.  He has not seen or heard from his parents in thirteen years but is reluctant to contact them due to feelings of guilt and embarrassment.

Altaf continues  battling life on many fronts.  The day he meets his parents his life will complete a full circle.  He is a survivor.

Written by Dr. Aslam Malik. This story appeared in our spring 2009 newsletter.